Well, it’s been a long wait and after much paperwork was filed and lots of questions answered, Thatcher is finally receiving potty training intervention provided by a behavioral specialist. As I’d stated before, we’ve tried everything a person can think of, from rewards to “open door” policy to schedule training, but without any help we were getting nowhere. Thatcher has been going “pee pee” in the potty every morning when he gets up for a very long time now, but we couldn’t seem to convince him that going potty is an all day event. We even tried a musical device that would sound when his underpants were wet, but this didn’t work because the device was not very loud and nobody could hear it unless they were right next to Thatcher when it went off and then the things stopped working. I called the company and got replacements, but when I mentioned that they weren’t loud enough, the person who answered the phone said, “We don’t want to scare the children by making the device too loud.” What bothers me about that, though, is that the device plays the tune “It’s a Small World,” which doesn’t sound like it would scare a child at all. Anyway, the musical device called Tinkle Toonz was a bust and we ended up calling it quits until the behavioral specialist could come in and save the day.

So, the question now is: If you’ve tried everything already, what is left to try? Well, do you ever have one of those “Ah ha” moments when it comes to figuring out how to teach your child, or any child for that matter? Our plan of action? Try everything! At the same time! Yup, that should do… try everything at once, but we’ll see… *fingers crossed. 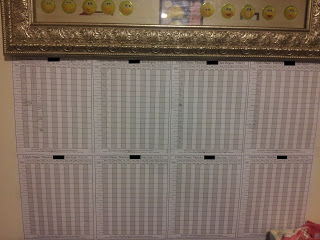 I made these using a MS Excel document. Each page is one document and there were a few tiny errors, but the times go from shortly before Thatcher wakes up (just in case he gets up early) to shortly after Thatcher goes to bed (in case we are up later than usual). On the bottom of the sheets is a legend to tell you what to enter in each box, which looks like this: 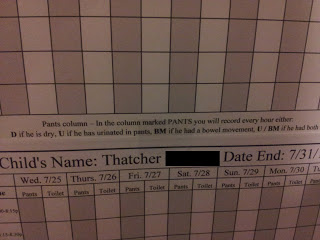 And here is one more picture of the schedule which shows a closer look at the top and where we’ve filled in part of it: 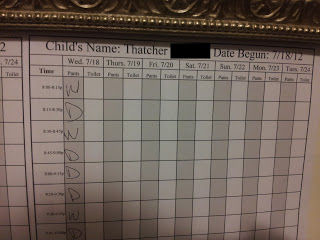 So, there are the pictures of the schedule, but of course, like I said before, schedule training did not work for Thatcher, so in addition to the schedule, we also have an alarm. This is like the Tinkle Toonz in that it is a sensor that goes off when it gets wet, but instead of being a musical tune that is difficult to hear, it is a much louder buzzing sound. Once the child gets used to the alarm, it will theoretically not scare them and it’s not so loud that it would cause them any pain. However, the difficult part about this device is that the alarm box (which makes the sound) has to be attached to the child’s shirt of outer clothing and it has a cord which goes down and attaches to the underpants where the sensor is located, so the most difficult part about this is the child getting used to wearing the device. With Thatcher this was a very simple process, but the behavioral specialist tells me that many children don’t like or are afraid of the device at first and will try to pull it off. Thatcher, on the other hand, was merely curious about the device, but wasn’t afraid of it and didn’t try to take it off. This alarm can be found at your local medical supply store or on the Sleep Dry website. We ended up giving the behavioral specialist the Tinkle Toonz alarms that were never used (they were replacements), which she plans to use as rewards for other children and she paid for our Sleep Dry alarm. Here is a picture of the box that ours came in: 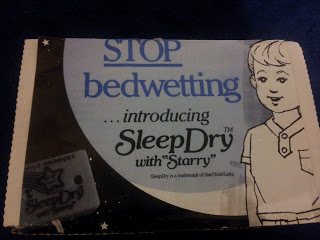 Of course, schedule training and an alarm doesn’t work by themselves. There have to be visual ques and rewards, so when Thatcher is taken to the potty (every 30 minutes [we also check to see if he’s dry every 15 minutes]), he is given this picture of the potty, which Thatcher’s preschool teacher gave to us for his schedule board:

Thatcher is given a small treat when his pants are dry, like one goldfish cracker or one gummy. You can choose your child’s favorite items, but given nothing if he’s wet. He is also given lots of praise and a piece of candy if he goes “pee pee” in the potty, which is a bigger treat than what he is given for being dry. If the alarm sounds before he’s sitting on the potty and he does not void in the potty, then he is given nothing, but if he finishes voiding in the potty when the alarm sounds he is given a piece of candy and lots of praise. And all of this certainly would not work if it weren’t for this little device: 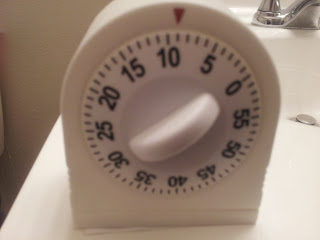 That’s right! It’s a kitchen timer, which only costs a couple of dollars at Wal-Mart. We set it to 15 minute intervals for the time being for checking dryness and putting Thatcher on the potty. At 15 minutes we check for dryness and 15 minutes later Thatcher is put on the potty. When Thatcher was much younger we were using a musical potty, which would play music when Thatcher voided in the potty, but this doesn’t work for smaller children and it is recommended that children with Autism immediately use the big potty with a seat that snaps in place and a stool. We used the smaller potty before because we didn’t know yet that Thatcher has Autism and therefore did not know about the recommendation to put the child on the big potty. This is also useful if your child does not like change. Fortunately, we chose a potty that looked similar to the big potty and had a top that could be removed and snapped to the seat of any toilet. Our potty set up looks like this: 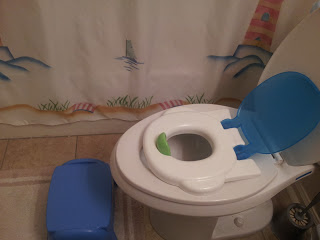 As you can see, the lid to the small potty snaps on the big potty very easily and can be used with either gender (the pee catcher comes completely off so that it can be used for girls, too). So far, the results are looking good. We are using lots of different tools and our fingers are crossed that Thatcher will be going potty every time very soon. As far as voiding in the potty, Thatcher has done this once (today) during a scheduled “sit on the potty” time… so, updates on Thatcher’s progress will come soon. 🙂