So, before I get into the real purpose of this post, I’d like to make some things known. First of all, I have decided that instead of referring to my son as “Monkey” like I have been, I am going to break that barrier with my readers and call my son by his name on here from now on, which is Thatcher. I will continue to allow his last name to remain private as well as our location for the time being. I’d also like to say that the reason I haven’t posted in a while is that over the course of the school year, things got really busy around here. I’m about to finish the requirements for my master’s degree and needed all the extra time I could get to focus on finishing my thesis and Thatcher was having an issue with the provider of his speech and occupational therapy. Basically, all of those wonderful things I’d said before about how great it was that he was talking; well, he’d reverted back to only saying, “no,” which I think had a lot to do with the fact that his therapists kept changing. He had three different speech therapists over the course of less than a year and then his occupational therapist took another job. Of course, I can’t fault her for wanting more pay in such a horrible economy, but Thatcher suffered and after she left, my son was assigned an occupational therapist that saw him once and then was on medical leave indefinitely, so it was time for a change. I went back to Thatcher’s doctor and requested new providers. In other news, Thatcher was approved for a waiver program in our state which pays for therapies that his medical card doesn’t cover so he’s now getting community living supports (2 hours a week) and will begin potty training intervention very soon.

Now, on to the purpose of this post: Activity boxes. I’ve decided that this blog needs more pictures and what a better way to start then with an idea given to me by Thatcher’s preschool teacher. At the end of the year, I had been asking about what my son can do in the summer to continue all the progress he’s making and his teacher came up with this:

These are numbered activity boxes. His teacher suggested starting with three boxes and building up to more. I have two sets of numbers 1-6, so the most we could do using the numbers is six boxes, which is more than enough for a four; almost five year old. Also, there were a couple of foam puzzles that wouldn’t fit in one of these boxes, so his teacher put it in a gallon sized bag. The boxes came from the Dollar Tree, which is one of my all time favorite stores. Everything in the store is $1 or less, so it is a true dollar store, unlike Family Dollar, Dollar General, and most other dollar stores.

So, we have all of this, but then, how do we initiate play with the activity boxes? We use a laminated folder that looks like this: 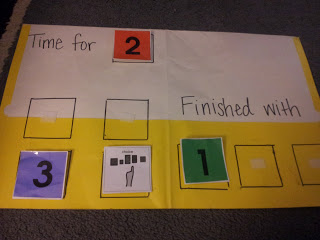 As you can see, the number of the box we are using goes in the “Time for” slot and the numbers of the boxes that we’ve finished goes in the “Finished with” slot. The boxes we haven’t started go in the other section along with a card for “Choice” which is the one with the hand. After Thatcher has completed using each activity box, he is allowed to choose the activity he’d like, such as iPad or television. This is the reward for completing the activities with minimal meltdowns.

I also like using picture cards with the boxes, instead of number cards, or in addition to number cards, which makes the folder look like this: 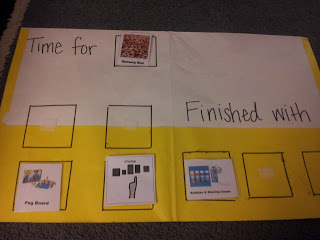 Since it’s difficult to see what the pictures say, I can tell you that it’s “Time for” Sensory Box, we are “Finished with” Bubbles and Shaving Cream, and we still have Peg Board and Choice left in this example. This is useful because it gives Thatcher a visual aid rather than an abstract number.

So, now that we’ve seen how it works, lets take a closer look at each of the activity boxes and we’ll start with the one that isn’t actually a box, but a bag. Here’s a closer look at the Foam Puzzles activity. There is a number puzzle and an alphabet puzzle in this bag and this is also the bag I store the folder and the number and picture labels in when they are not in use:

And here is a closer look at how the tops of the boxes are labeled with picture cards. These are pictures that I made using my computer, which I laminated with laminating sheets I purchased at Wal-Mart. I did have an issue with the cards coming apart, but a little Elmer’s glue fixed that w/o making the pictures not visible.

These have been attached with Velcro dots. I put the softer ones on the box and the rougher ones on the backs of the pictures, but it doesn’t matter how you do it as long as you do it the same way for every box.

And here is a closer view of the numbers on the front of the boxes:

As you can see, they also come off and stick on using Velcro dots. This is great because you can put the number cards on the tops of the boxes or on the front:

And here is what is actually in these activity boxes. This one is full of bristle blocks. Thatcher’s teacher had these left over. Most of these boxes were made by her, but there were a few left over boxes that I used to create extra activities: 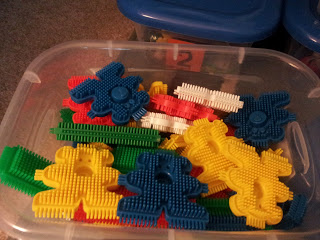 And here is a box with dinosaurs, animals, numbers and dice. Thatcher’s teacher included index cards in some of the boxes which explain the activities.

And here are the directions for the previous box. I hope you can read that:

And here’s the next box. I put the picture card in the box to make it easier to see what is actually in this box. It’s just craft pom-poms (fuzz balls), clothes pins, containers, and some easy grip tongs, which I added to the box since Thatcher still has trouble using the clothes pins to pick up the pom-poms: 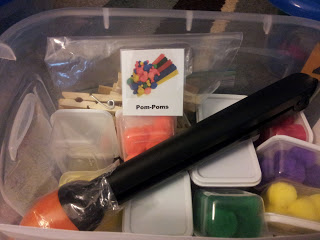 And here are the directions for this box: 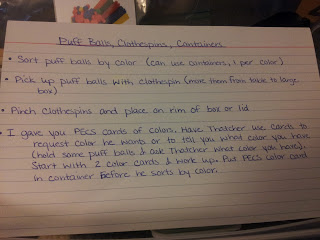 This is the Alphabet box and it’s pretty self explanatory: 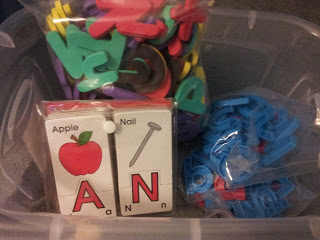 Here is the Music Box. It has lip whistles, which don’t make a high pitched noise like other whistles, so they aren’t as annoying. It also has a Kazoo, Recorder (Flute Toy), Hand Clapper, and some baby spoons which I also purchased at the Dollar Tree. I ordered the lip whistles online on a website where they were on clearance. I highly recommend them if you can find them. I got a set of 12, individually wrapped for about $3 plus shipping. The spoons can be used as drum sticks by emptying the box and turning it upside down:

And here is a favorite; the Sensory Box! You can fill this with pretty much anything, but beans aren’t as messy as sand, rice, etc. You can also rotate what is in the sensory box. The cups are baby snack cups from the Dollar Tree and the spoons are just spoons we had when Thatcher was a baby. There are also some magnetic letters and things buried in the beans for Thatcher to find:

And here is the Shapes box. One of the little baggies has shapes that look like buttons and a shoe string for threading. This helps teach the skills needed for tying shoe laces: 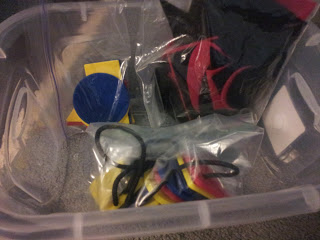 And here is the instructional card that was in this box:

Here’s a Peg Board. This is good for teaching fine motor skills as well. The pegs can also be stacked into each other and it all fits in this little box, which is a good way to keep all the pieces together:

And here is the directional card for that box:

And here is a more random box. It has shaving cream, bubbles, makeup brushes (good for sensory), and a sterile brush for the brushing protocol that I’ve previously discussed on here. We have a dry erase board that easily comes off the wall and we use it as a mat for using the shaving cream, play dough, and putty:

And here is how we transport the boxes to therapy. Thatcher’s OT is used to working with adults, so the facility is not already equipped with a lot of these things. Five of the smaller boxes fit in this one tote:

And the ziplock bag with the number puzzles fit on top: 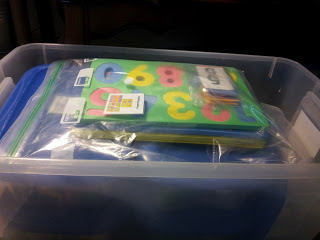 So, here’s the tote, all ready to go to OT with Thatcher. We use these boxes at home, too:

And all of the boxes store nicely under the coffee table in our living room:

And that’s it! All kinds of activities inspired by a teacher and numerous therapists. This is also good for typical children and a great learning experience for all!